Great Times at The Bivouac!

On July 24th, 2021 the Maine Historical Wargamers Association held their first in-person event in more than a year. The event took place on an amazing private property in Bowdoin, ME. We had amazing weather, some really awesome games offered by our experienced Game Masters, and some excellent BBQ. I would really like to thank Lauren the property owner for opening up his land for our use, a big thank you to Dave Soucy, Jeff Estabrook, Wyatt Traina, Gabe Landowski, and Johnathan Steitzer for running games, and another big thank you to everyone who came and helped set up Friday evening and break down on Saturday. Really an amazing group of folks!

Here’s some of the action in the words of the GMs:
From GM Dave Soucy:
“15 mm Kampfgroup Commander Rules.
Scenario: Canadians vs 12th SS at Mesnil Patry June 11, 1944.

The battle begins with the “boy soldiers” of the 12th SS dug in around Les Mesnil Patry. Making use of hedgerows, orchards, woods and outlying farms they were ready for an assault by 1st Hussars and Queens Own Canadian Rifles. They had intercepted some radio traffic and were fore warned of the attack. The Canadians deployed from Norey en Bessin with one attack headed to the north of Mesnil and another group headed southwest. Both groups ran into stiff resistance from Panzer Grenadiers and Panzer Pioneers. In the later case, flamethrowing wasp units were called in to flush out the SS. Both sides lost most of their tanks but both side were able to regroup some of them. Our refight saw the Canadians not doing quite as well as they did historically. Some of that had to do with them not utilizing their artillery as best they could have.
It was fun. Good stories told. New members indoctrinated! Tristan, Tim and Mike. Thank you so much for playing and catching on so quickly.
Cheers” 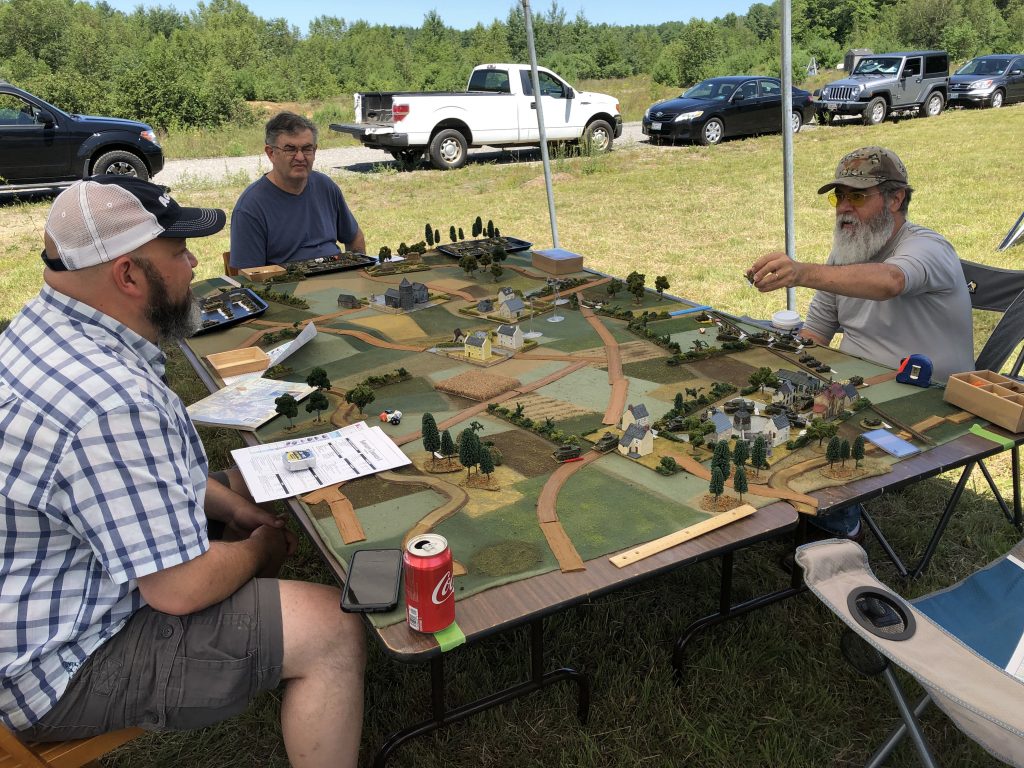 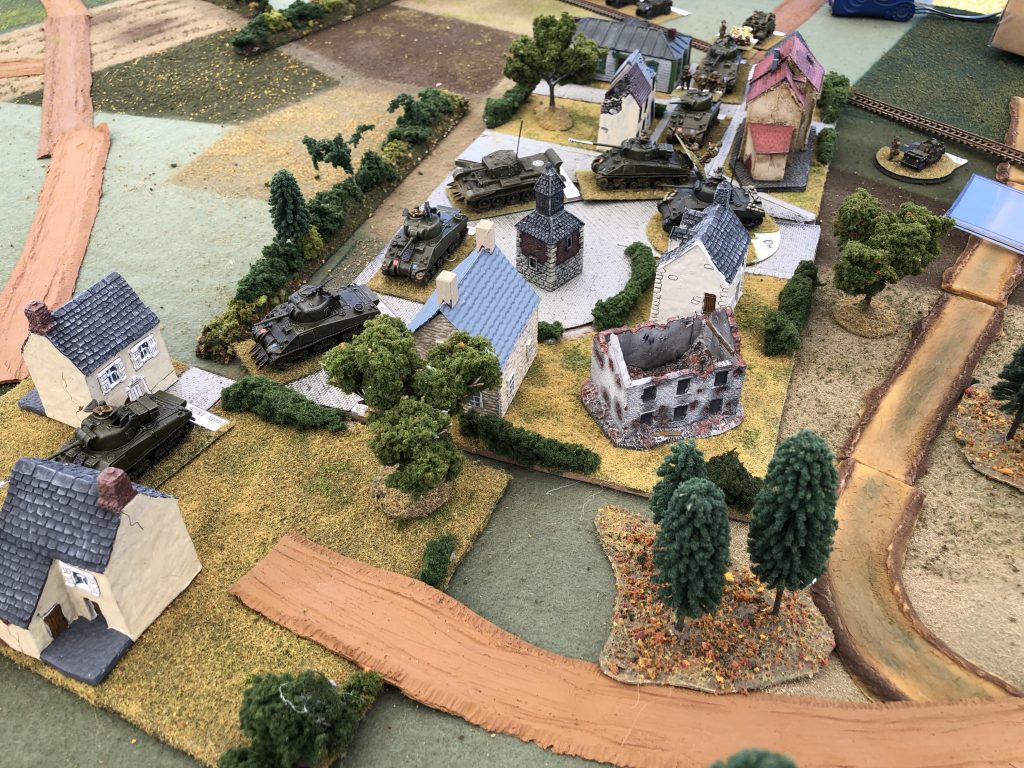 The French were the aggressor as they were trying to drive the Bavarians away from Orleans so they could use it as an area to try and break the siege of Paris. They (the French forces) marched on to the game board while the Bavarians forces were set up. We managed to play almost eight full turns which was great.
The action started with the Bavarian breech loading, Krupps guns slowing the French deployment in the middle and middle right flank. The French did assault the town of Bacon and drove the Bavarian skirmish troops from it in disarray. On the French left flank, the opposing forces shaped up to have a swirling back and forth cavalry clash as first the Bavarians charged and drove them back then it was the French doing the same. In the middle, the French forces combined to launch a major assault and captured the town of Coulmiers. put were then driven back by a spirited Bavarian counter attack. At the end of 7.5 turns the Prussians were ahead as they still held all the victory point towns and road exits but the French superiority in numbers was starting to show itself and the Bavarian forces were hard pressed all along the line.

Thanks to Dave and MHWA for organizing this! Great to see people and game in person” 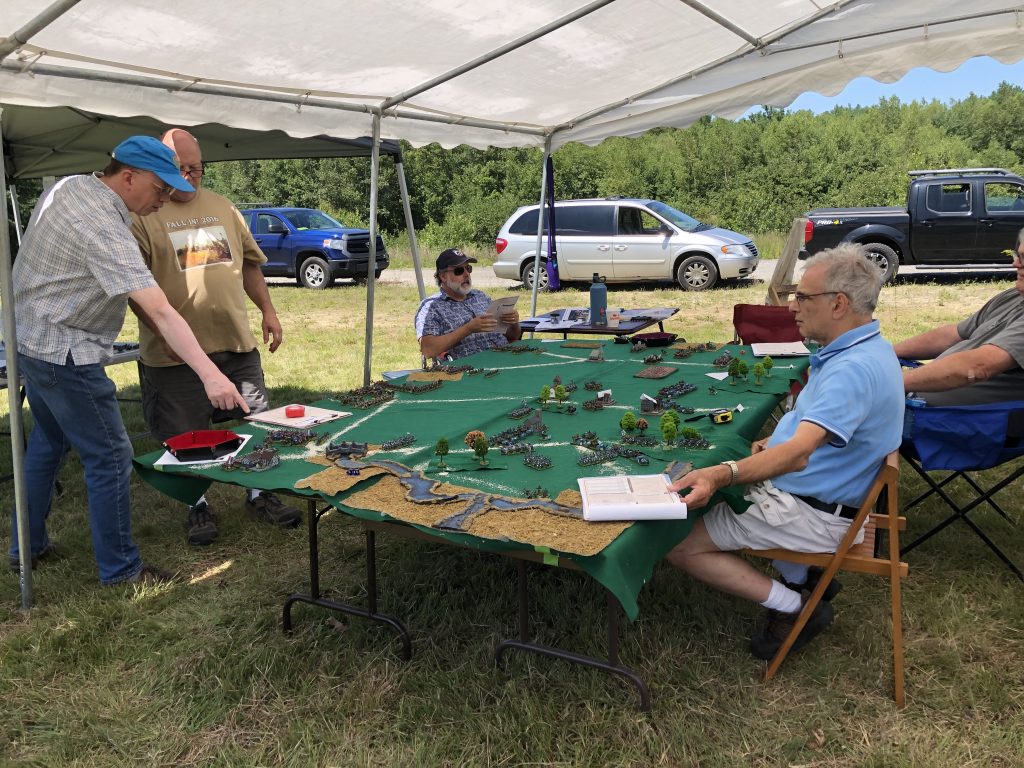 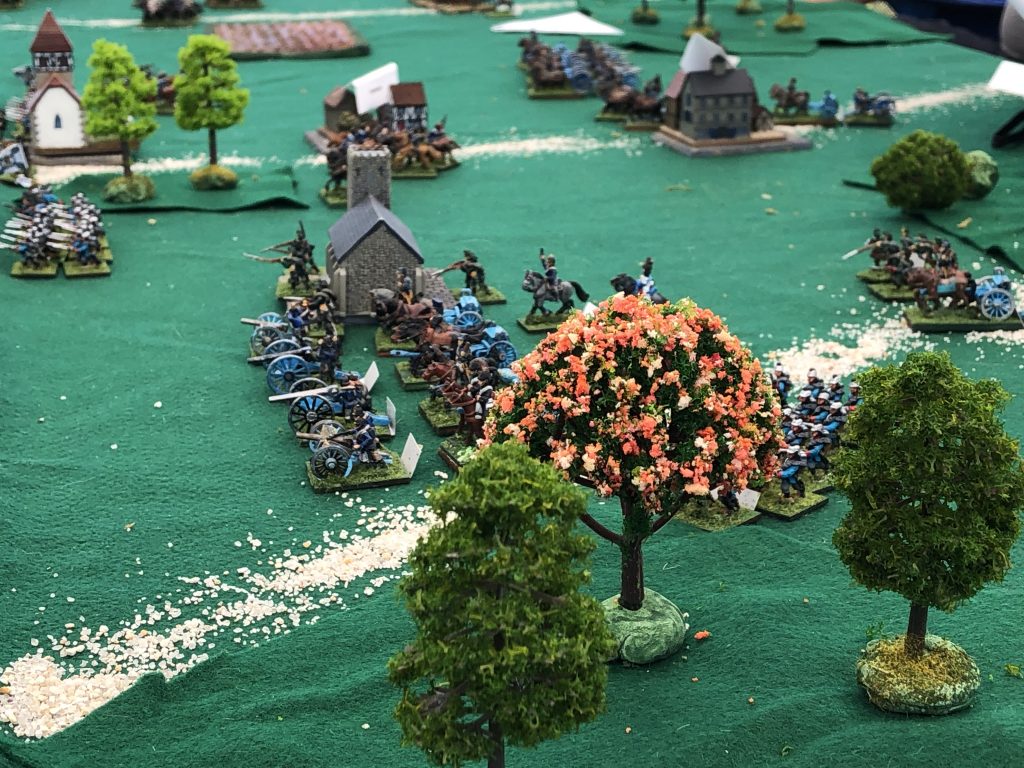 From GM Wyatt Traina:
“Thanks for putting it together! I had a great day!
For To the Strongest!:
4 players: Wyatt Traina (Normans), Gino Barillias (Danes), Alex Truslow (Scots), Jon Steitzer (English)
King Malcolm of Scotland and King Aethling of England had formalized their alliance just in time to join forces to repulse the invasion of the Normans led by Bishop Odo, and their Danish allies led by Bjorn Ironsides.

Battle lines were drawn with the Danes squaring off against the English, and the Normans across the field from the Scots.
Danish infantry made a strong push into the English lines after surviving punishing volleys of bowfire. A light rain had whipped up by midmorning allowing the Danes to reach the enemy lines in good fighting shape where the battle began in earnest. The Norman light troops quickly advanced into the town of Abernethy and harried the formed pike that was slowly marching to the town’s defense. Norman Knights on the right flank were battered by Scottish knights and saved only by a flurry of javelins from Norman light horse harrying the Scottish flank.
Very little decisive action was happening until Bjorn Ironsides personal Huscarls who has suffered many losses from English bowfire charged and broke a unit of English halberdiers. The ferocity of the attack caused the English line to waver. At the same time, Knights led by Bishop Odo plunged into some Scottish pikes, disordered by the guerilla tactics of the light troops in the village, and broke a hole in the Scottish line of castle forged steel.
A unit of light English horse threatened to capture the enemy camps, but it came too late. The Scottish line was broken, and the scots routed causing the King Aethling to retreat as well and rethink his allegiances.
The loss forced the signing of the treaty of Abernethy, and King Malcolm became a vassal of William the Conqueror.” 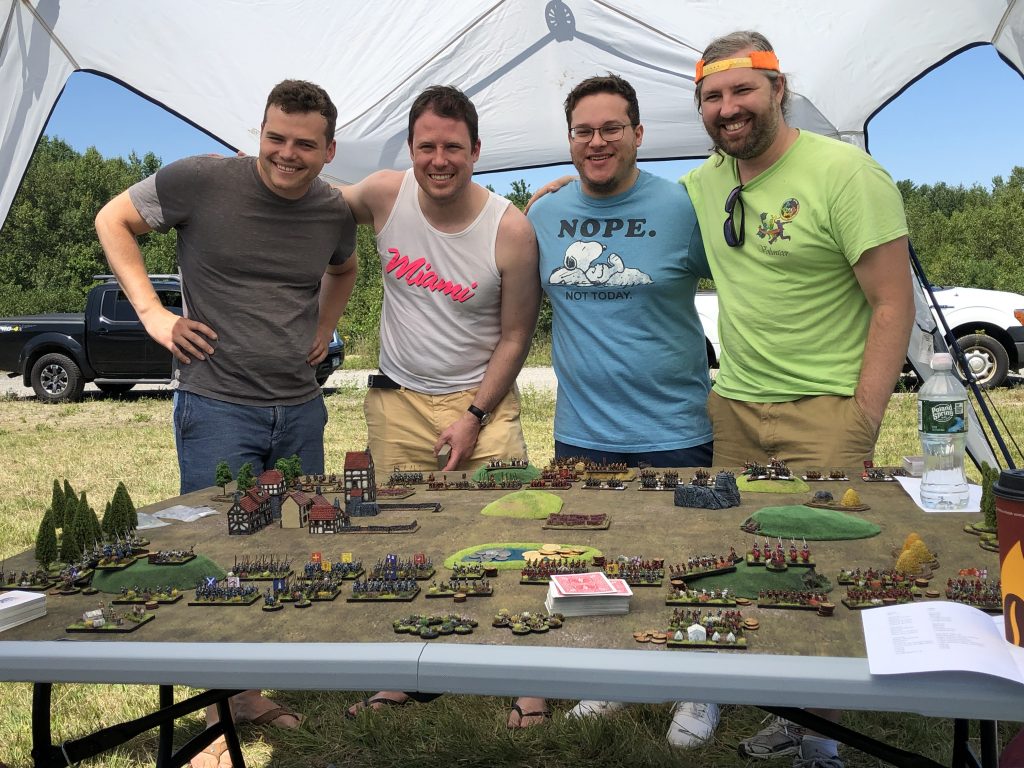 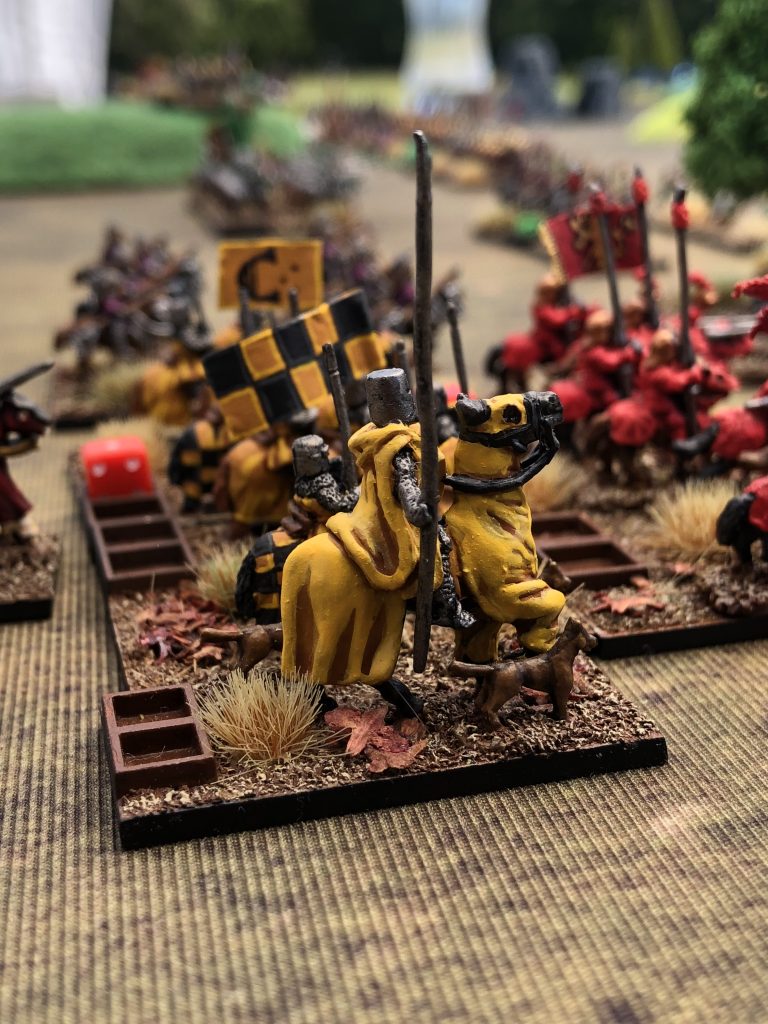 GM Johnathan Steitzer ran a game of SAGA: Age of Crusades in the afternoon with Wyatt. He had some really well done minis and terrain for the game, and explained it well to folks that inquired. Beautiful game, thank you!

GM Gabe Landowski ran his modified Manoeuvre rules to be played with Nutcrackers, Rocking Horses, and Toy Cannons out in the yard or field. Its a fun game and easy to pick up and play. I highly recommend checking it out if you get a chance! 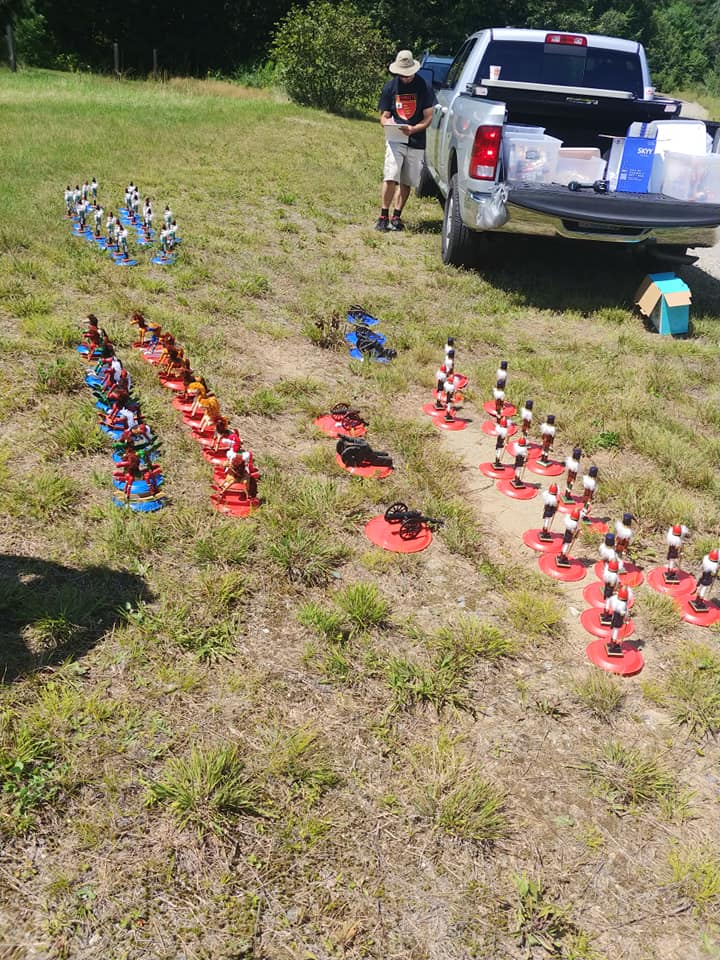 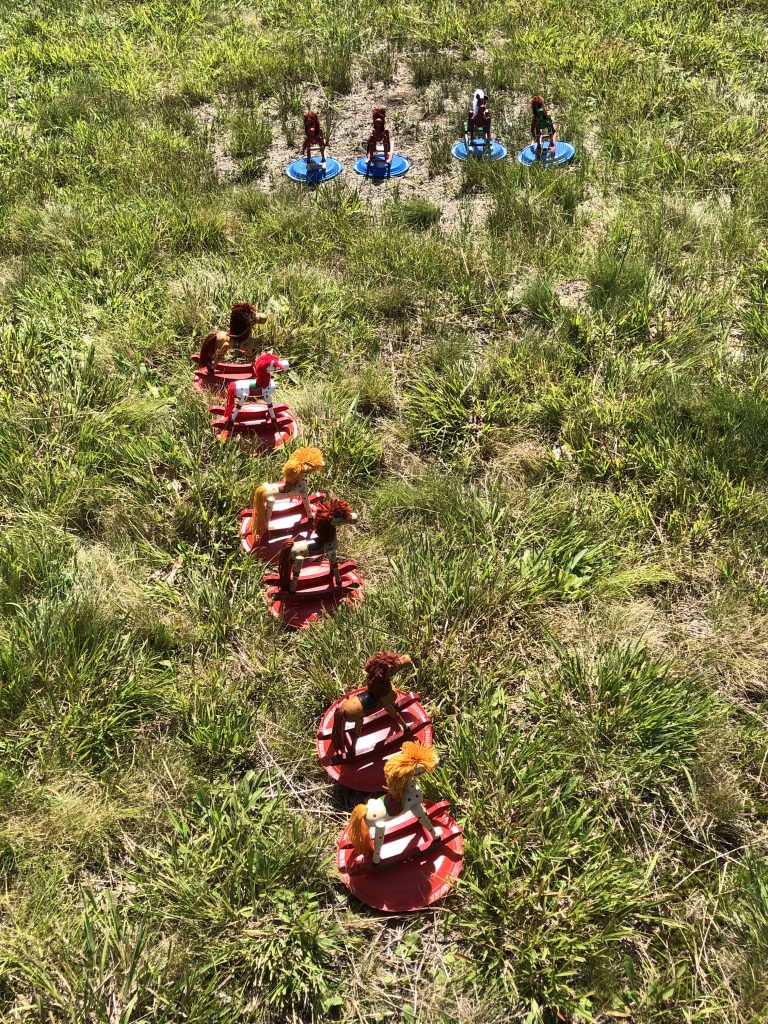 Once again, thank you to everyone that attended the event, it was fun to organize and it felt great to be back together playing some games! I look forward to another chance for an outdoor game in the future! Our next event is being planned as we speak, MiniCon will be held at the Maine Mall in South Portland on September 25th, 2021, I hope to see you there! 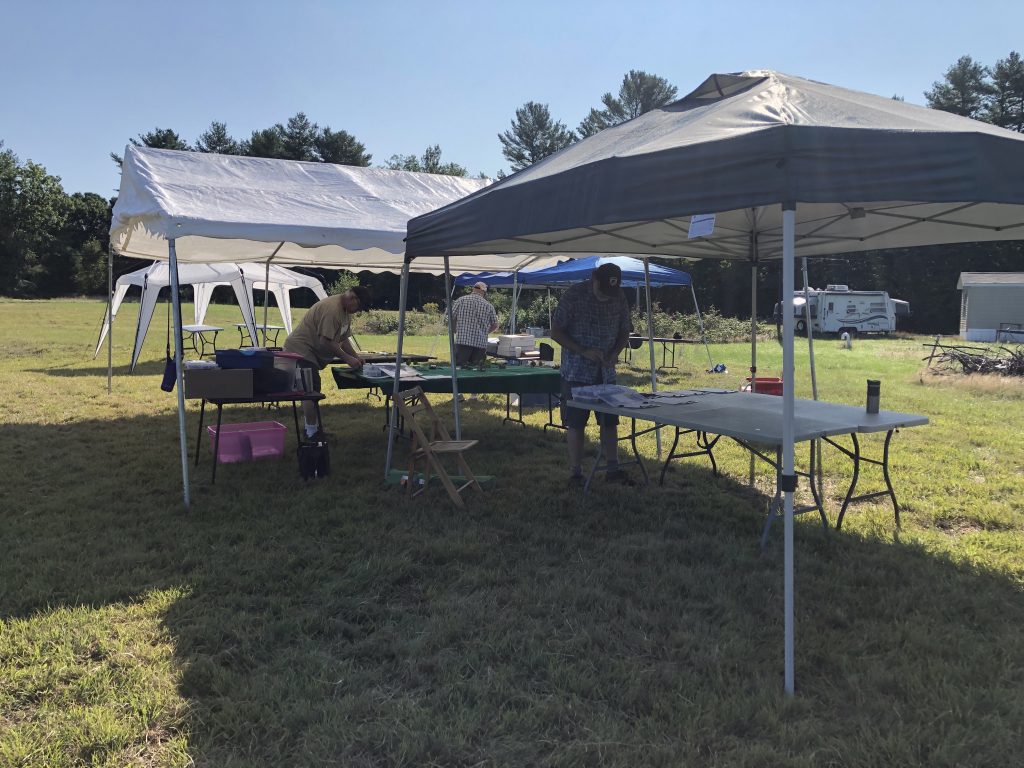 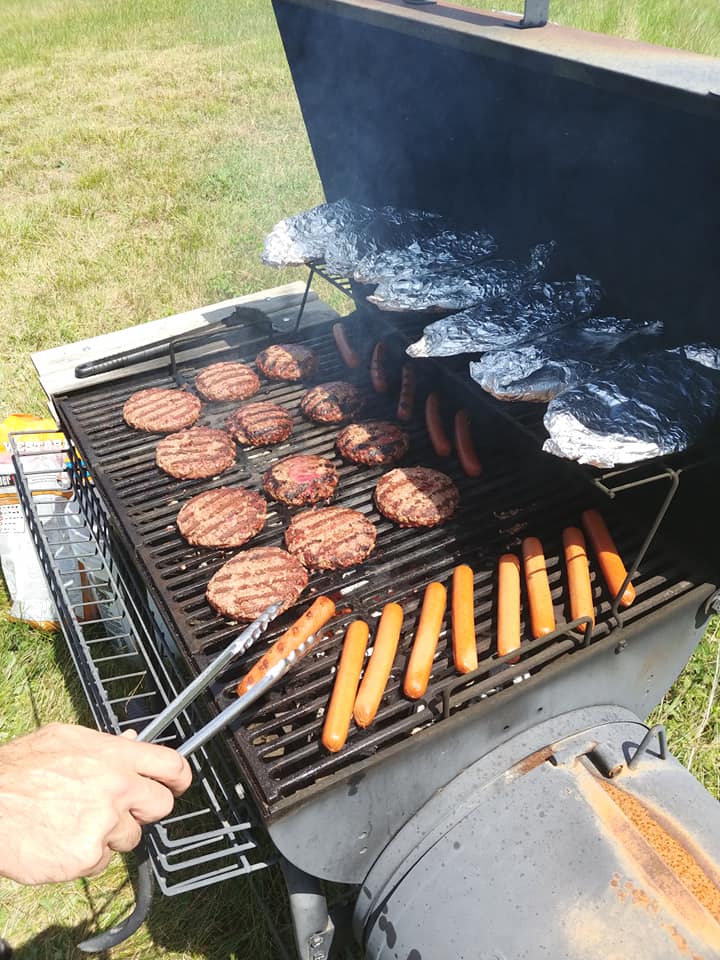